Religion was very important to the Aztec heritage they worshiped hundreds of gods and godesesses, each Aztec god had one or more aspects of the human nature. Many Aztec’s had agricultural gods because there empire was based on farming land. They thought the gods where in charge of their destiny.

These are 6 the Aztec gods

The god of the dead and he is a guardian and spirit guide.

MIXCOATL He was the god of hunting. NANAUATZIN He is the god of the sun because he sacrificed himself to keep the sun shining.

QUETZALCOATL Creator god he has a human form and serpent form.

XIPE TOTEC He is the god of agriculture, the west, disease, goldsmiths and the season’s.

XIUHTECUHTLI He was the the god of life after death.

It is a plank of wood with a carefully shaped handle and jagged pieces of obsidian rock on the plank which was made to tear flesh and maim it. But the obsidian was brittle but still was very affective at cutting each piece of obsidian is like a very sharp knife is what the experts say.

This is a replica of a Maquahuitl

The next weapon was a sling put projectile lets say a rock or clay ball becomes a bone breaking force if it hits your head even with a steel helmet on it can kill you it can make a indent in your skull and make you brain internally bleed. it was made with to leather strands,ropes, strings or vines and with a small leather pouch were the rock or clay ball would go. They wouldn’t just  pick up rock on the battle field en-less they had to but they would carefully make clay balls the balls were known to fly 650 or more.

The picture above is a Aztec Sling

This is Aztec Sling Ammo

The cuauhololli is was a mace made with wood with a ball at the end of it was made to crush and smash bones. Most of these maces were made of wood. This was on of the many kind of clubs they used but this was the most famous.

A spear or lance was very common in Aztec warfare you could throw them and also use the as a close range weapon. They were ​majorly sharp and were 7 feet long. They didn’t have a small tip like normal spears did, the blade on an Aztec spear was a foot long and was made of stone. This spear was known to pierce Spanish armor which is made of steel. It was sharp enough a man could shave with even know they wouldn’t shave with a seven foot razor. 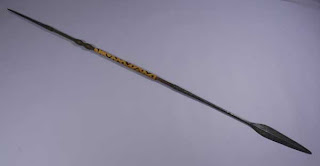 This is a Aztec Spear

Bows were known as tlahuitoll and was common for and Aztec to use bows were 5 feet long 2 feet shorter than a spear thats a good sized bow! The arrows were known as yaomime and were pointed with flint, bone or obsidian and were kept in a quiver called a mixiquipilli. Out of all their weapons they were the most skilled with the bow and arrow. It was believed that there arrows would fly 450 feet or more.

This is a Aztec Bow Replica Chart

It is a spear device for long distance attacks. It is basically a stick with a handle and  hook or socket that engages a light spear or dart at the end. The flipping motion of this weapon makes it much faster and makes it go farther than it could be thrown with one hand.

This is a Aztec Atlatls

Welcome to your brand new blog!

This is a sidebar and can be changed in Widgets in your dashboard.

You can also modify number of sidebars in theme options!